Splay tree is not perferctly balanced. Worst case time can be O(n) for one single operation. But average running time is O(n lg n)

A graph G is a set of vertices and a set of edges that connects the vertices together.

It is written as

Disjoint set is a mathematical term which represents sets among which no two set has any item common. So intersection od any two sets results to empty set.


Merges two sets into one set.


Given an item it returns the set identifier in which the item belongs.

A tree is a set of nodes and edges that connects the nodes. Between there could be exactly one path.

When a node is distingushed as root the thre is a rooted tree. In such a tree every node has a parent except the root node. From any node to the path of root parent is the first node in that path.


[incomplete] Complete binary tree can not have a right child without a left child.
Posted by MA at 9:28 PM No comments:


Data structure with nodes and keys and data  are associated with each node. Total order is defined for the keys.

Its is simple to identify or remove smallest key. But no other key can be identified or removes as easily.

Insertion is possible at any time.


A complete binary tree- A tree in which every level is filled except bottom level which is filled in the left to right order.

No child of any node may have key less than its parents key.


A binary heap can be maintained using an array. For any node X with an index i its children are at i*2 and i*2+1. Like for a node with index 3, its children nodes are at 6 nad 7.


Place the new key at the boottom of the tree- ie the after the last entry- set this as current node.
Now the entry needs to bubble up untill the heaporder property is satisfied-
Repeat untill no swap possible
If current node's key is less than its parents' key swap current node with parent.


Remove the root entry and replace root with last item in the tree (array). Then while possible bubble down the entry by comparing and swaping with child that has smaller key than current nodes key untill no swap is possible.

Insert all the items in the tree any order. That is we can keep the array of numbers as it is.
Take the last internal node and bubble down to tree like removeMin() operation in the heap. 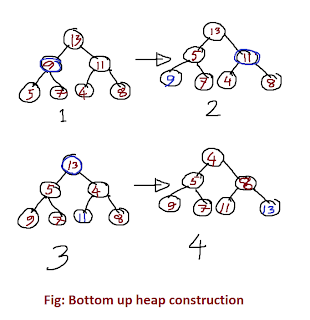 Binary search tree is a ordered dictionary in which keys for each node in the tree has total order. It is also called ordered or sorted binary tree.

We can find, insert, remove entries relatively fast. Quickly find node with minumum or maximum keys or keas near another key.

We can find words with close spelling without knowing exact spelling or can find something like smallest number that is greater than 100.

Any node may have data attached to it. 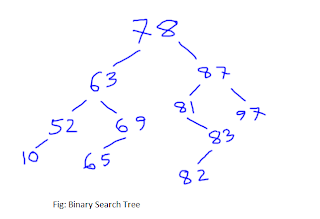 We can get all the keys in sorted order by doing inorder traversal of the tree.


Find a node with key K


While searching for a key K we encounter both of these keys if K is not in the tree. We need to keep track of the keys. When we go right node we have key smaller than K. When we go left we have key greater than K. Last of these two is the smallest key >=K and largest key <=K.

Find a node with smallest key


Starting form root continously select left child as long as possible. Last node will be the node with smallest key of the tree.

Find a node with largest key


Starting form root continously select right child as long as possible. Last node will be the node with largest key of the tree.


Let K be the key we want to insert.
Search the tree for key K untill it is found or we hit NULL node
If NULL replace the NULL node with  K.
If K is found insert new node as left or right node with key K